A Google doodle is a rare, temporary variation of the Google logo to celebrate holidays, events, milestones, and prominent historical figures on google’s homepages. Here are some best of google doodles that embraced our search screen over the years.

Dr. Wubbo Ockels was the first Dutch space resident, and this Google Doodle is celebrating his birthday. Renowned for his optimistic view of life, he was a renewable energy champion. This doodle showed the zero-gravity condition he was settled in, with funny and accurate imagery of his infamous mustache.

The cheerful google parade was created to commemorate the Carnaval de Barranquilla in Colombia, an annual cultural heritage festival derived from Indigenous, African, and European traditions. In the midst of this character-filled, stylish illustration that certainly raises a smile, look for the unusual masks and costume.

A little girl’s grandmother tells her a bedtime story about her favorite heroines in this Google Doodle, from US journalist Ida Wells to Korean activist Lee Tai Young.

Syed Sadequin Ahmed Naqvi stroked new life into the centuries-old art of Islamic calligraphy in 1960s Pakistan, turning words into vibrantly informative pictures of expressionism. The doodle of his 78th birthday celebrates the legacy of Sadequain as one of the most famous and prolific artists in Pakistan.

Google honored the classic film in 2010, 71 years since the wizard of Oz burst onto cinema screens. The doodle portrays Dorothy, the scarecrow, cowardly lion, Tinman, and Toto the dog as they first spot the Emerald City, using the landscape to subtly spell out the logo of Google. 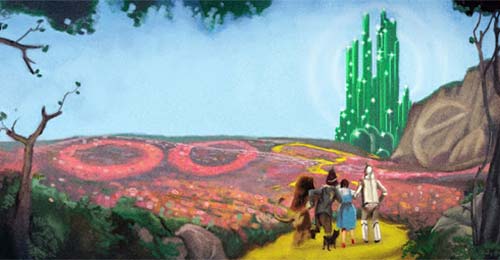 Born in Iraq in 1950, with her award-winning houses, the architect Zaha Hadid captured the world’s attention and shattered stereotypes. Next to the Heydar Aliyev Center in Baku, Azerbaijan, which draws on many aspects of classic Islamic architecture, this doodle from 2017 portrays her quite creatively.

This was my pick of the best Google Doodles throughout the years. Google stays true to its objective, even through Doodles, as they go from being informative to interactive to entertaining. They’re a creative and imaginative part of the platform’s features. And we all absolutely love them!

11 Brands That Excel In Human Centered...