Stranger Things is one of the most wildly popular shows Netflix has ever released. Set in 1980s America, this sci-fi-horror-supernatural-thriller show follows a group of inquisitive kids as they try to discover the source of the mysterious events that have suddenly started happening in their small town.

The show attracted millions, as soon as it came out in 2016, and over the years its popularity has only rapidly risen. Season 3, the most action-and-thrill-packed one of all, broke viewership records and reached 24.6 million unique viewers in the US within the first 4 days of its release only.

So what is the reason behind Stranger Things’ gigantic success? Sure, it has a unique storyline that is loaded with nerve-wracking plot twists, and all of it is presented in a very immersive manner. Yes. All this, but there is another major factor too.

The show, right after it’s release, garnered attention for using creative marketing strategies, but out of all, the one that literally put the brainpower of the creative geniuses behind it on the forefront was the way they make an authentic and extensive ‘80s experience and utilized nostalgia as a tool to captivate the audience.

Nostalgia is a feeling of longingness to experience a time that is far into the past. This positive feeling is usually experienced when certain triggers in the present, say a song, movie, food, scent, etc., activate pleasant memories of the past. Marketing in which such triggers of past memories are paired with the product to make the consumers feel the longingness and connection are called Nostalgia Marketing.

Stranger Things, a clear homage to the ‘80s, is a mine of such nostalgic triggers and not just in the form of hairstyles and costumes. Here are three ways in which the show utilized this strategy.

Stranger Things is brimmed with ‘80s popular culture references, and not just name dropping here and there, the kind which is seen very often, but carefully curated scenes inspired by popular 80s movies, like The Goonies, Ghostbusters, Poltergeist, E.T, etc. It even has Winona Ryder, the decade’s sweetheart, playing one of the leading roles. The theme song is inspired by the works of John Carpenter, designed to bring back the eerie vibes of theme songs in ‘80s horror movies. Even the title font is made to resemble the font of Stephen King’s novels and Star Trek movies.

There are literally hundreds of ‘80s pop culture references scattered throughout the show, guaranteed to get the viewers, especially Millennials, glued to the screens, thanks to nostalgia and yearning to experience that era once again. 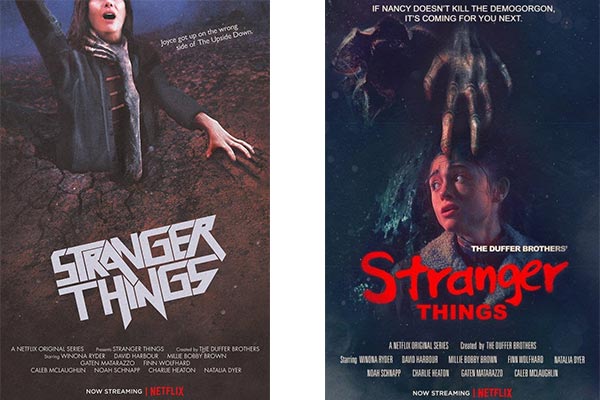 Nostalgic triggers were not just incorporated in the show but used in other marketing strategies as well. To promote season 2 for e.g., they recreated the posters of popular ‘80s movies that inspired the show’s retro vibes like Stand by Me, Firestarter, The Evil Dead, etc and posted them on the show’s social media accounts with the hashtag #StrangerThursdays with additional tidbits and behind the scenes of the show; even if you haven’t seen those movies, if you’ve read R.L Stine books as much as we have, you’ll definitely recall some of those book covers after looking at these posters. This is a marketing strategy involving minimal effort to produce maximum effect.

This is undoubtedly one of the most talked-about nostalgic throwbacks in Stranger Things. While Coca Cola products have been shown multiple times throughout the show, in season 3 specifically, New Coke makes an appearance. This was a nod to the absolute disaster that the release of this product was in 1985. The modified formula was met with negative reviews, so much so that the product was eventually discontinued. Season 3, also set in 1985, brought back all the memories of that controversy. As a consequence of which, Coca Cola re-released New Coke for a limited time, and unlike the past, this time it was welcomed with open arms.

So, these were a few examples of how the show made the most out of Nostalgia Marketing.

A psychology graduate with a keen interest in reading fiction, writing, sleeping, and overthinking (yikes!)

The Psychology of Emojis

Is Storytelling The Future Of Marketing?